The Real Story Glen and Rita’s mission is situated on 1,000 acres of land purchased by the ministry in the 1930’s.  Most people of this area are hunters and gatherers.  This means that instead of raising animals and planting in their own fields, they gather what they can find in the wild. 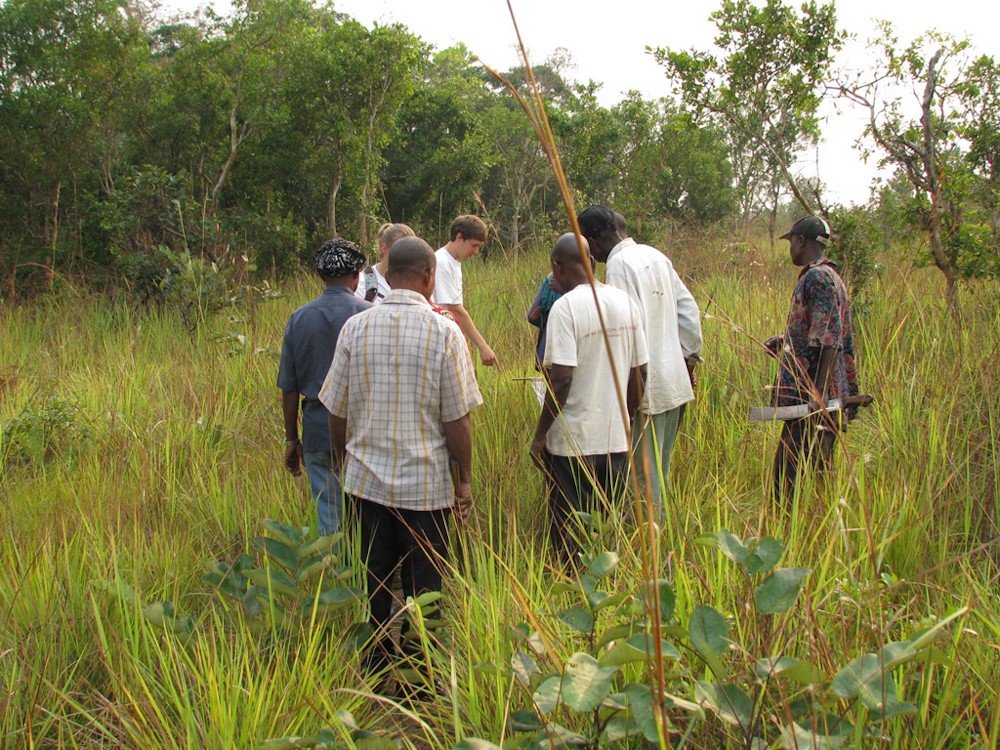 Learning to care for the Land

Often the people create a large fire in the shape of a circle.  As the animals flee to the center, the villagers kill them regardless of whether they are young or old, male or female. As the human population increases and technology increases, people continue to discover easier ways to kill animals, making wildlife very scarce.   There are no more elephants, hippos, antelope or baboons there.  People have killed and eaten them all. Some villagers do plant fields of corn because it is the most valuable crop.  However, corn quickly depletes the soil, causing the second year’s crop to be weak and sickly. So after the first harvest people look for another forested area to chop down. Year after year more forested areas are cut.  Meanwhile the people are becoming worse off, since they have to travel farther and farther to plant fields and search for animals. 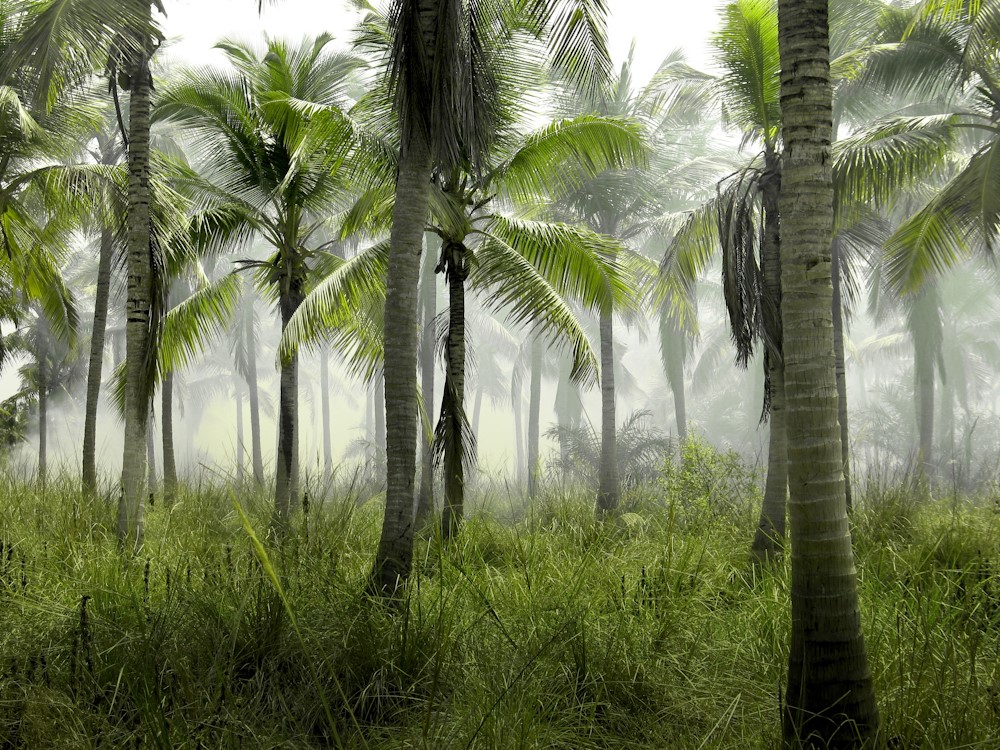 Glen and Rita are using the 1,000 acres to show how to care for the land as you use it to produce food. They demonstrate how different plants put nutrients back in the soil to make the fields reusable. They show the value of planting trees for food and building materials.  They also show how you can raise domestic animals for food instead of killing the wild ones. 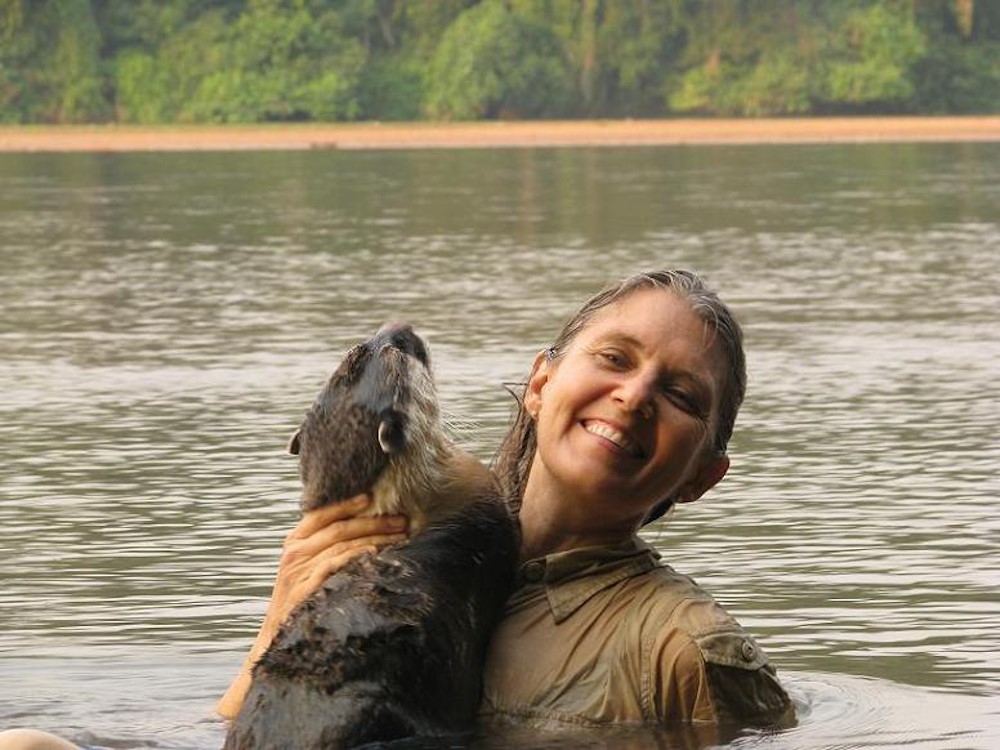 Rita and their pet otter

It is hard to convince people who are hungry and barely surviving to trust that the extra work will be worth it.  Seeing the process work on the mission compound inspires them to try. Glen also has a sawmill and teaches the pastors in the school how to operate it.  They also learn how to build furniture with the wood they make. When the pastors leave the school, they not only know how to care for people spiritually, they also return to their village with a trade and with knowledge to help their people come out of poverty. The Palm Feller Someone started dropping palm trees on the mission compound to collect palm wine.  Glen tried to catch the person responsible, but was never quick enough.  He always arrived a day late, finding trees lying dead on the ground.   One day Glen caught a break.  He discovered some jugs collecting sap from a recently downed tree.  Glen took the jugs back to his house so that the guilty palm feller would come to him to retrieve his expensive containers. 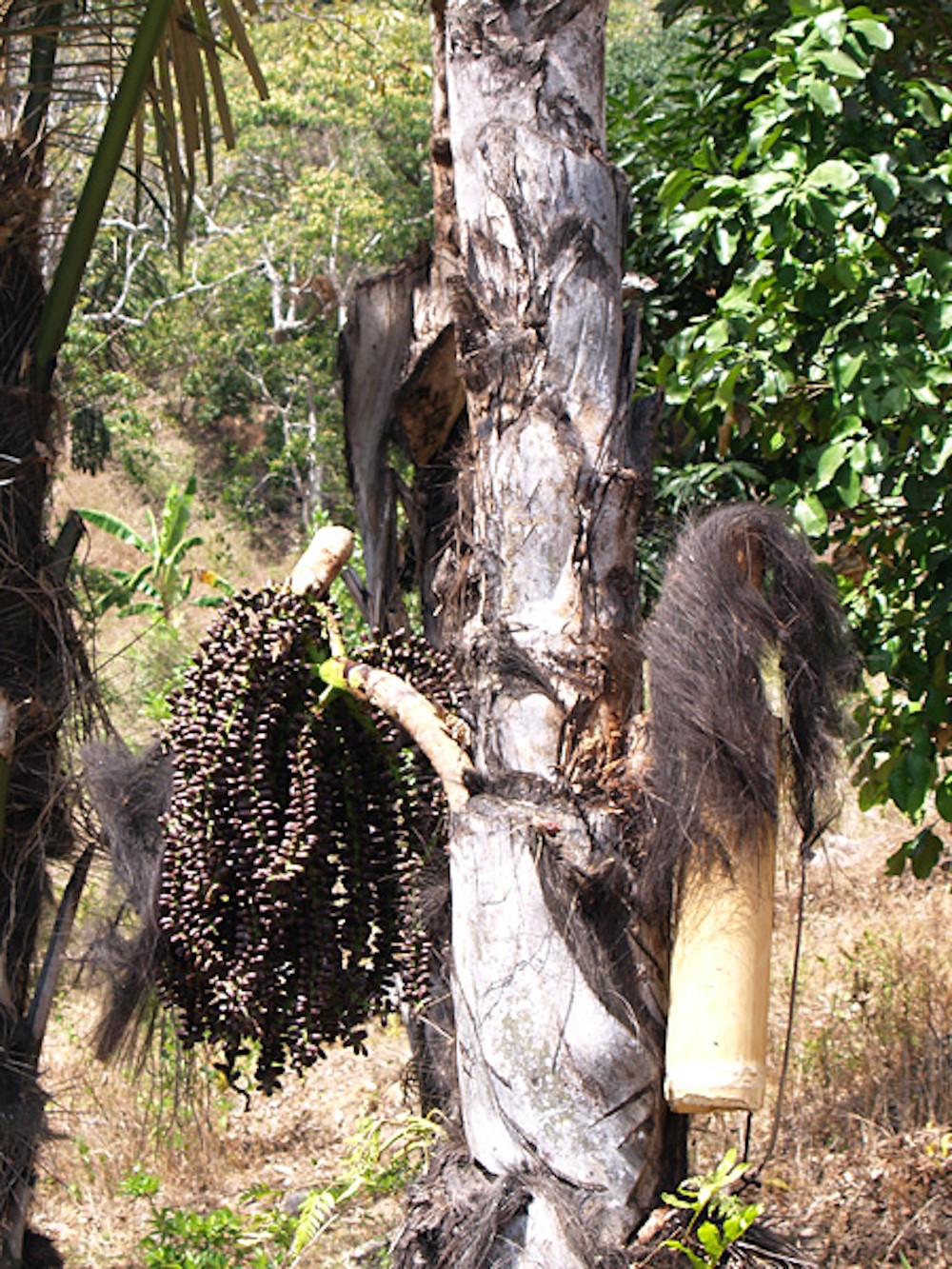 When the man discovered the missing jugs he became very angry.  The next day he followed Glen into the forest to beat him up.  Thankfully some other men intervened and stopped him. Although a beating was avoided, both men were still angry at the other. Glen was angry because the man was cutting down the mission trees.  The man was angry because Glen had interfered with his business.  Glen didn’t know what to do.  Later, the man’s brother was falsely accused and thrown into prison in the big city. The palm feller came to Glen and said, “Please forget everything I did.  I shouldn’t have cut down your trees.  Now, can you help get my brother out of jail?” Glen promised to try and visited the city.  The man secretly followed Glen to see what would happen. To his surprise Glen kept his word and met with the top officials to discuss his brother’s case. Because of Glen’s influence, the officials released the palm feller’s brother! 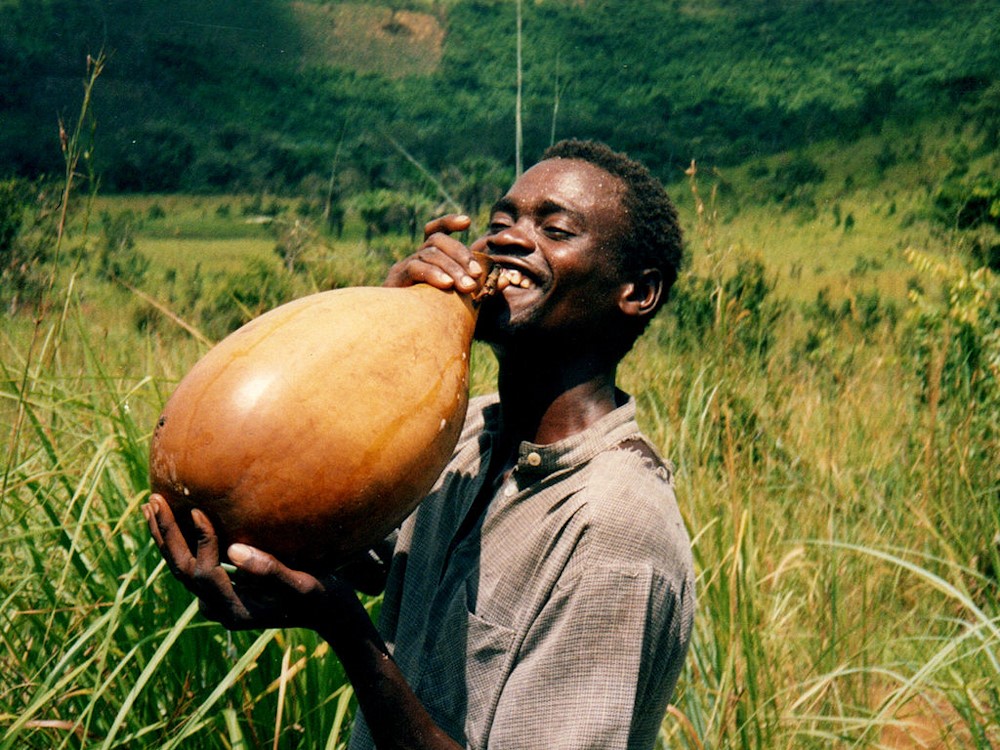 Drinking palm wine out of a jug made from a gourd. Photo credit: Nick Hobgood CC BY 20-2

When Glen returned to the village compound the palm feller came to him with a changed heart. He was so grateful.  From that day on they began to be friends. Now the palm feller attends the mission church and enjoys playing the drums during the service! Power Encounter Near the mission compound is a village that has embraced the Gospel.  The village has its own church and a national pastor. 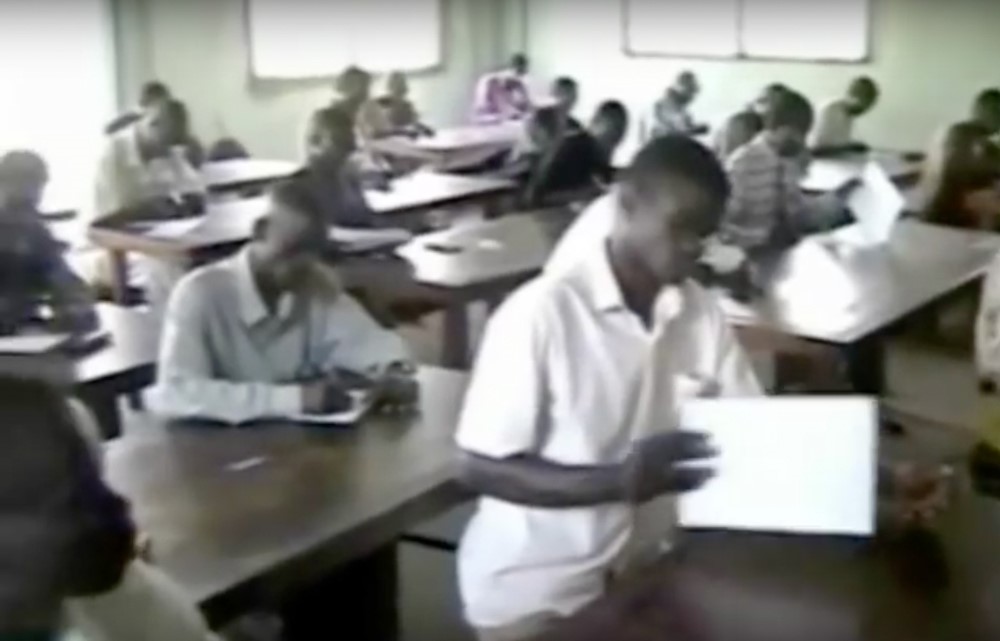 Glen passed through the village one Good Friday.  He noticed a huge crowd, and a witch doctor in the middle of the crowd putting on a grand show.  Glen knew that this particular witch edoctor used a special trick to deceive the villagers.  Before he arrived he would have his helpers secretly hide “evil charms” in people’s yards.  The next day he would show up and pretend to use magic to find these charms.  This impressed the people who would then pay for his services. For part of his act he set up what looked like a graveyard.  Then he put his magic staff on a gravestone, telling the crowd that whoever touched it would be struck by lightning and die instantly.  When Glen came upon this evil gathering, he became very upset.  How could these people who were supposedly following Jesus welcome this witch doctor into their village and fall for his tricks? Glen went into the village church to pray. As he prayed, God impressed on his heart that he needed to have a ‘power encounter’ with the witch doctor.  Glen needed to show the village that Jesus is more powerful than the witch doctor’s magic.  Glen made his way through the crowd and to everyone’s surprise, picked up the magic staff. He said, “Look at me people:  The witch doctor said I’m supposed to die if I touch this… but I am not dead!  He is deceiving you. Jesus is more than anything he is offering you!” The crowd was furious with Glen and rushed at him. He escaped into a nearby house and huddled inside as the villagers tried to break down the roof with large stones. The witch doctor didn’t like the fact that all his customers left so he went and called them all back.  This allowed Glen to escape to the mission compound unharmed. A Witch Doctor’s Confession The next day the witch doctor came to Glen’s house. He told Glen that while he was praying in the neighboring hut, he noticed that his power went down. Glen didn’t really understand what that meant, but the witch doctor said, “I felt my power go from a 10 to a 2 as you prayed. 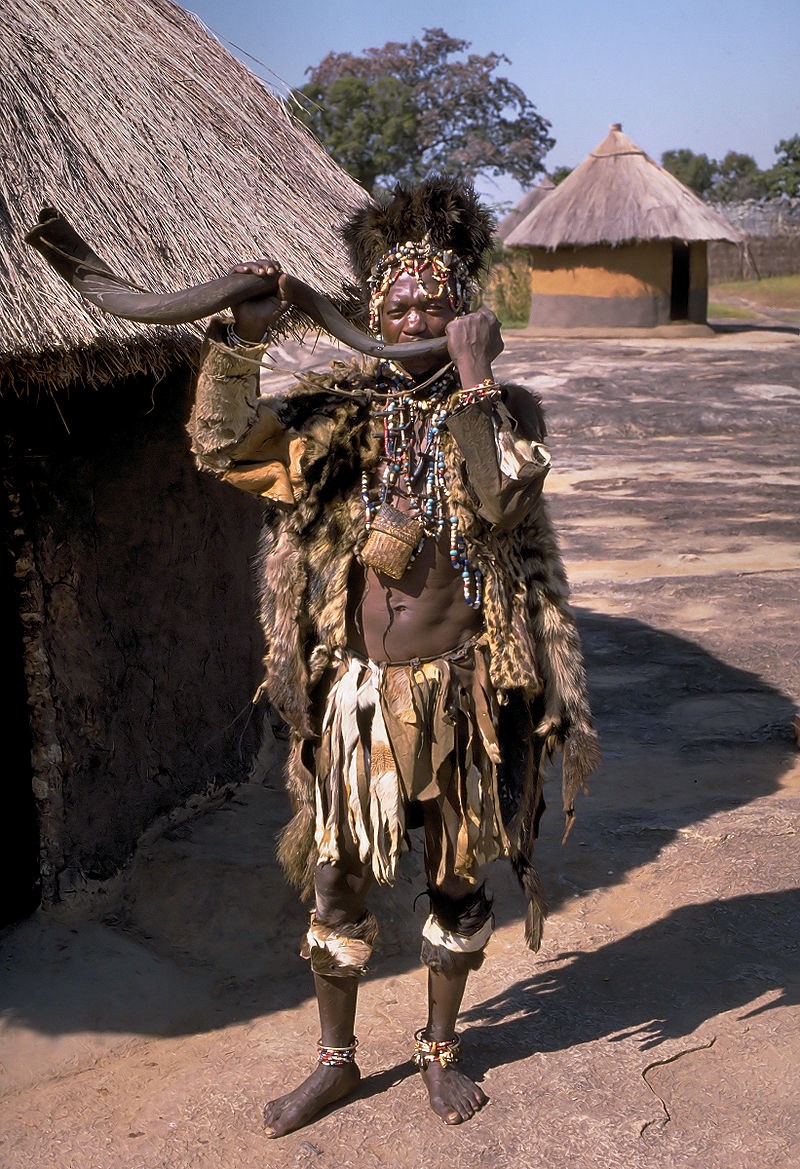 Many African countries have witch doctors. This one is from Zimbabwe. Photo credit: Hans Hillewaert

Now I know there is a power that is greater than witch doctor power. I no longer want to be a witch doctor.” He told Glen he wanted a Bible, and he wanted to give his life to Jesus. Later, Glen trained a man who became a pastor in the former witch doctor’s village. Two years later, the pastor came and told Glen that the man was still following Jesus, and serving faithfully as a deacon in his village church! The Enemy is real, but God’s power is also real, and it is much greater.  We should never be overwhelmed by the enemy’s power.  Only God’s power can set people free and bring life.  Through Jesus and his death on the cross God forever destroyed the power the enemy once had over us,  See Colossians 2:15 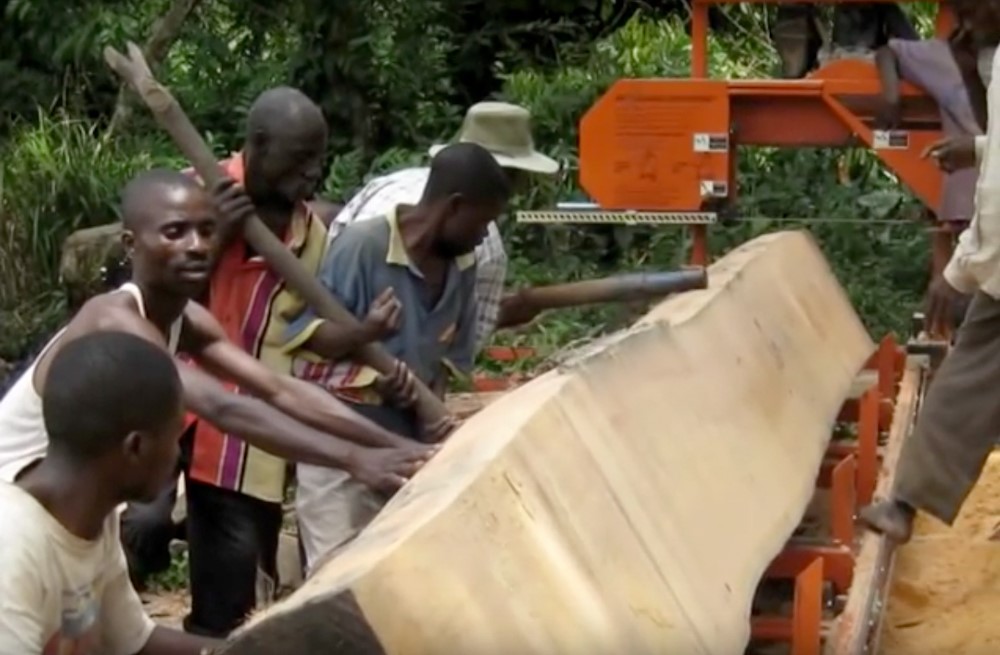 The pastors using the saw mill 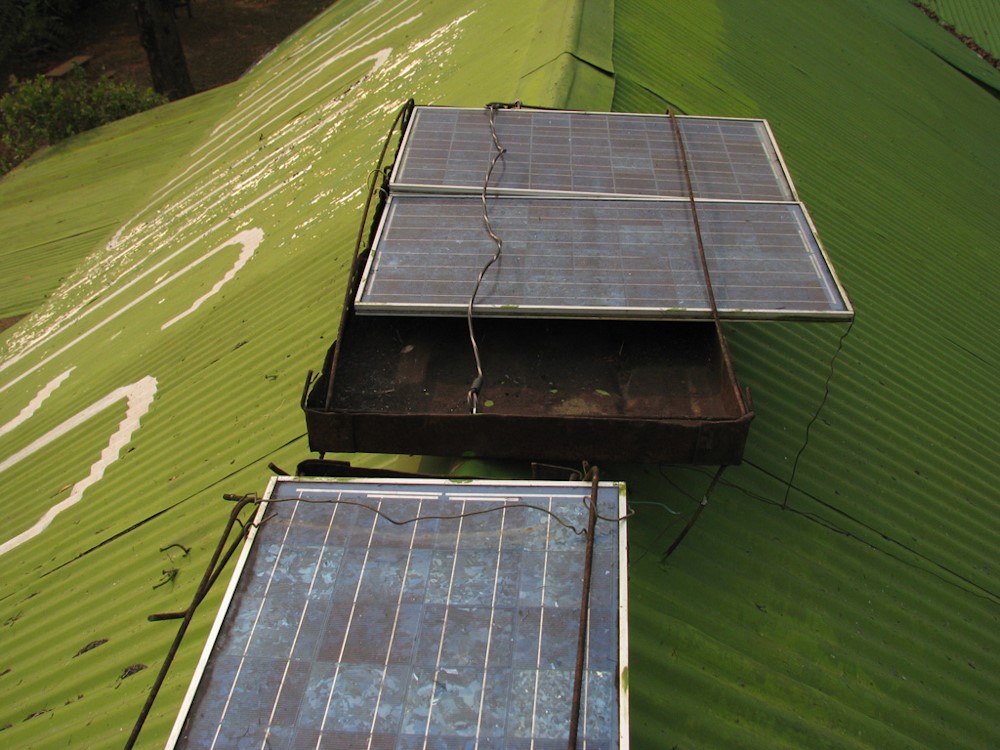 Solar Panels on a roof